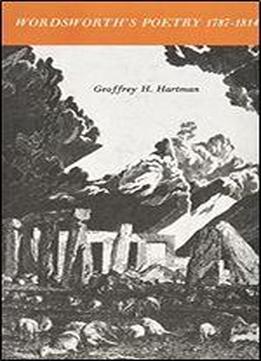 The drama of consciousness and maturation in the growth of a poet's mind is traced from Wordsworth's earliest poems to The Excursion of 1814. Mr. Hartman follows Wordsworth's growth into self-consciousness, his realization of the autonomy of the spirit, and his turning back to nature. The apocalyptic bias is brought out, perhaps for the first time since Bradley's Oxford Lectures, and without slighting in any way his greatness as a nature poet. Rather, a dialectical relation is established between his visionary temper and the slow and vacillating growth of the humanized or sympathetic imagination. Mr. Hartman presents a phenomenology of the mind with important bearings on the Romantic movement as a whole and as confirmation of Wordsworth's crucial position in the history of English poetry. Mr. Hartman is professor of English and comparative literature at the University of Iowa. "A most distinguished book, subtle, penetrating, profound."-Rene Wellek. "If it is the purpose of criticism to illuminate, to evaluate, and to send the reader back to the text for a fresh reading, Hartman has succeeded in establishing the grounds for such a renewal of appreciation of Wordsworth."-Donald Weeks, Journal of Aesthetics and Art Criticism.