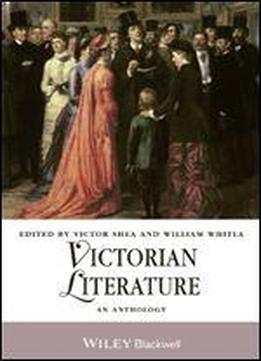 "Victorian Literature" is a comprehensive and fully annotated anthology with a flexible design that allows teachers and students to pursue traditional or innovative lines of inquiry. Included in this collection are 105 of the period's prose, poetry, drama, and nonfiction writers, including such canonical authors as Tennyson, Arnold, the Brownings, Carlyle, Ruskin, the Rossettis, Wilde, Eliot, and the Brontes. Fifty authors are women. In addition to selections from the major authors of the period, the volume promotes an ideologically and culturally varied view of Victorian society by including women, working-class, colonial, gay and lesbian writers, and dialect poets. These selections offer readers the opportunity to study new voices beyond the canon. There are 5 contextual sections covering the Condition of England Gender, Women, and Sexuality Literature and the Arts Religion and Science and Empire. These contexts are interdisciplinary in nature and examine the social, cultural, artistic, and historical factors at play during the period. They also contain unexpected sub-sections on topics of recent scholarship, such as environmentalism and animal rights mass literacy and mass media sex and sexuality Victorian childhood melodrama and comedy the Irish question ruling India and the Indian Mutiny innovations in print culture and the science of race. The coverage is further expanded with an extensive website for teachers and students that presents additional contextual readings (each with new sub-sections, such as Orientalism, ecclesiastical parties, literature and new technologies, law and the sexual subject), visual materials, audio recordings, maps, chronologies, and thematic indexes. These are fully integrated with the text and include detailed annotations about names, places, events, allusions, and leading ideas. From the canon to its extensions to its contexts, this website is a fresh and exciting introduction to the diversity of the Victorian age.