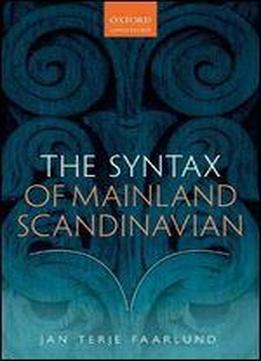 This book explores the syntactic structures of Mainland Scandinavian, a term that covers the Northern Germanic languages spoken in Denmark, Norway, Sweden, and parts of Finland. The continuum of mutually intelligible standard languages, regional varieties, and dialects stretching from southern Jutland to eastern Finland share many syntactic patterns and features, but also present interesting syntactic differences. In this volume, Jan Terje Faarlund discusses the main syntactic features of the national languages, alongside the most widespread or typologically interesting features of the non-standard varieties. Each topic is illustrated with examples drawn from reference grammars, research literature, corpora of various sorts, and the author's own research. The framework is current generative grammar, but the volume is descriptive in nature, with technical formalities and theoretical discussion kept to a minimum. It will hence be a valuable reference for students and researchers working on any Scandinavian language, as well as for syntacticians and typologists interested in Scandinavian facts and data without necessarily being able to read Scandinavian.