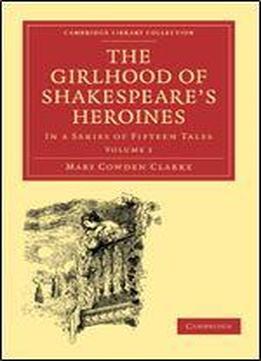 Mary Cowden Clarke (180998) was the daughter of the publisher Vincent Novello. She produced a complete concordance to Shakespeare's works in 1845, and her fascination with the plays led to her publishing in 1850 a series of imaginative accounts of the girlhood of some of his heroines. Her motive was 'to imagine the possible circumstances and influences of scene, event, and associate, surrounding the infant life of his heroines, which might have conduced to originate and foster those germs of character recognised in their maturity as by him developed to conjecture what might have been the first imperfect dawnings of that which he has shown us in the meridian blaze of perfection'. These 'prequels' offer a back-story which is surprising in its subversive interpretation of the plays and especially of the role of the 'hero'. Volume 1 includes the stories of Portia and Lady Macbeth.