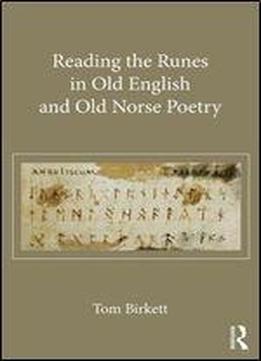 Reading the Runes in Old English and Old Norse Poetry is the first book-length study to compare responses to runic heritage in the literature of Anglo-Saxon England and medieval Iceland. The Anglo-Saxon runic script had already become the preserve of antiquarians at the time the majority of Old English poetry was written down, and the Icelanders recording the mythology associated with the script were at some remove from the centres of runic practice in medieval Scandinavia. Both literary cultures thus inherited knowledge of the runic system and the traditions associated with it, but viewed this literate past from the vantage point of a developed manuscript culture. There has, as yet, been no comprehensive study of poetic responses to this scriptural heritage, which include episodes in such canonical texts as Beowulf, the Old English riddles and the poems of the Poetic Edda. By analysing the inflection of the script through shared literary traditions, this study enhances our understanding of the burgeoning of literary self-awareness in early medieval vernacular poetry and the construction of cultural memory, and furthers our understanding of the relationship between Anglo-Saxon and Norse textual cultures. The introduction sets out in detail the rationale for examining runes in poetry as a literary motif and surveys the relevant critical debates. The body of the volume is comprised of five linked case studies of runes in poetry, viewing these representations through the paradigm of scriptural reconstruction and the validation of contemporary literary, historical and religious sensibilities.