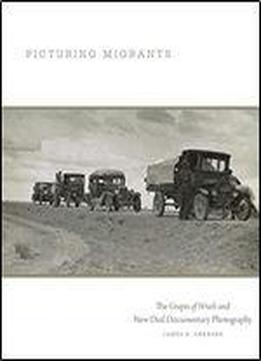 As time passes, personal memories of the Great Depression die with those who lived through the desperate 1930s. In the absence of firsthand knowledge, John Steinbeck's The Grapes of Wrath and the photographs produced for the New Deal's Farm Security Administration (FSA) now provide most of the images that come to mind when we think of the 1930s. That novel and those photographs, as this book shows, share a history. Fully exploring this complex connection for the first time, Picturing Migrants offers new insight into Steinbeck's novel and the FSA's photography - and into the circumstances that have made them enduring icons of the Depression. Looking at the work of Dorothea Lange, Horace Bristol, Arthur Rothstein, and Russell Lee, it is easy to imagine that these images came straight out of the pages of The Grapes of Wrath. This should be no surprise, James R. Swensen tells us, because Steinbeck explicitly turned to photographs of the period to create his visceral narrative of hope and loss among Okie migrants in search of a better life in California. When the novel became an instant best seller upon its release in April 1939, some dismissed its imagery as pure fantasy. Lee knew better and traveled to Oklahoma for proof. The documentary pictures he produced are nothing short of a photographic illustration of the hard lives and desperate reality that Steinbeck so vividly portrayed. In Picturing Migrants, Swensen sets these lesser-known images alongside the more familiar work of Lange and others, giving us a clearer understanding of the FSA's work to publicize the plight of the migrant in the wake of the novel and John Ford's award-winning film adaptation. A new perspective on an era whose hardships and lessons resonate to this day, Picturing Migrants lets us see as never before how a novel and a series of documentary photographs have kept the Great Depression unforgettably real for generation after generation.