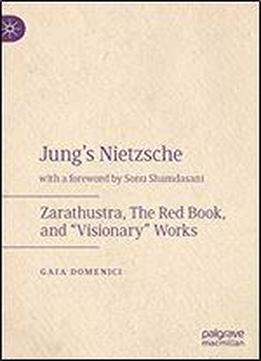 This book explores C.G. Jung's complex relationship with Friedrich Nietzsche through the lens of the so-called 'visionary' literary tradition. The book connects Jung's experience of the posthumously published Liber Novus (The Red Book) with his own (mis)understanding of Nietzsche's Zarathustra, and formulates the hypothesis of Jung considering Zarathustra as Nietzsche's Liber Novus both works being regarded by Jung as 'visionary' experiences. After exploring some 'visionary' authors often compared by Jung to Nietzsche (Goethe, Hlderlin, Spitteler, F. T. Vischer), the book focuses upon Nietzsche and Jung exclusively. It analyses stylistic similarities, as well as explicit references to Nietzsche and Zarathustra in Liber Novus, drawing on Jung's annotations in his own copy of Zarathustra. The book then uses Liber Novus as a prism to contextualize and understand Jung's five-year seminar on Zarathustra: all the nuances of Jung's interpretation of Zarathustra can be fully explained, only when compared with Liber Novus and its symbology. One of the main topics of the book concerns the figure of 'Christ' and Nietzsche's and Jung's understandings of the 'death of God.'