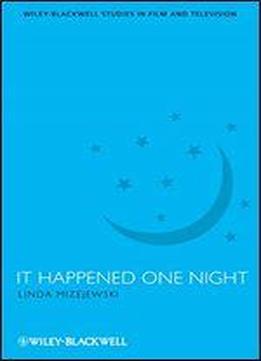 A movie that swept the 1934 Academy Awards and captivated Depression-era America, It Happened One Night challenged the ways Americans imagined marriage, romance, gender, and class difference. This book examines key scenes and formal features of It Happened One Night, and explores its lasting importance in film history and in cultural studies. Consideration of the films role in establishing the genre of the romantic comedy film Investigations into the films persistent sexuality and its creativity in avoiding Depression-era censorship Establishment of the cultural, economic, and political context of a film that directly addresses the Depression and class issues Exploration of how the film invokes and develops the stardom of Clark Gable and Claudette Colbert and how this stardom intersects with the films topics of gender, genre, sexuality, and class