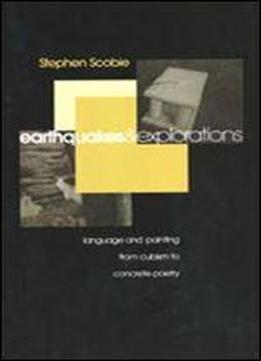 Like the earthquakes and explorations depicted on the covers of Gertrude Stein's notebooks, this study responds to artistic and linguistic fault lines and charts new territories. The author's concern is both with a general theoretical question - the relationship between painting and poetry, between the visual and the verbal - and with a specific period of artistic history - the early years of the twentieth century, when Cubism flourished. Rather than seeing any conflict or irreconcilable division between painting and poetry, Scobie proposes, as a model for their relation, the Derridean notion of 'the supplement.' This relation is grounded in the pervasiveness of language, in the ways in which language surrounds, imbues, structures, and supplements both verbal and non-verbal images. Working from the double focus of theory and history, this book does not attempt to develop a consecutive argument, but rather navigates around its topics, adopting a slightly different approach in each chapter. It begins with a general theoretical discussion of the role of language in painting and in art history, then moves to a series of specific discussions of aspects of Cubism, considering the paintings of Georges Braque, and the writings of Gertrude Stein and Guillaume Apollinaire. It concludes with an examination of the experimental form of concrete poetry, including sound and visual poetry, especially the Cubist-influenced work of Ian Hamilton Finlay. Earthquakes and Explorations will interest those studying art history, literary criticism, and critical theory.