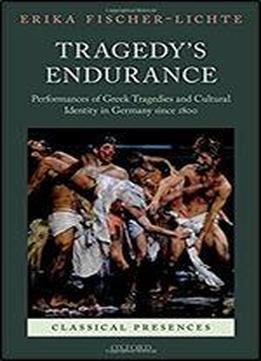 This volume sets out a novel approach to theatre historiography, presenting the history of performances of Greek tragedies in Germany since 1800 as the history of the evolving cultural identity of the educated middle class throughout that period. Philhellenism and theatromania took hold in this milieu amidst attempts to banish the heavily French-influenced German court culture of the mid-eighteenth century, and by 1800 their fusion in performances of Greek tragedies served as the German answer to the French Revolution. Tragedy's subsequent endurance on the German stage is mapped here through the responses of performances to particular political, social, and cultural milestones, from the Napoleonic Wars and the Revolution of 1848 to the Third Reich, the new political movements of the 1960s and 1970s, and the fall of the Berlin Wall and reunification. Images of ancient Greece which were prevalent in the productions of these different eras are examined closely: the Nazi's proclamation of a racial kinship between the Greeks and the Germans the politicization of performances of Greek tragedies since the 1960s and 1970s, emblematized by Marcuse's notion of a cultural revolution the protest choruses of the GDR and the new genre of choric theatre in the 1980s and 1990s. By examining these images and performances in relation to their respective socio-cultural contexts, the volume sheds light on how, in a constantly changing political and cultural climate, performances of Greek tragedies helped affirm, destabilize, re-stabilize, and transform the cultural identity of the educated middle class over a volatile two hundred year period.