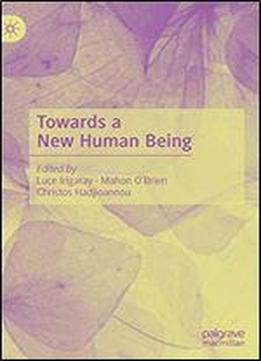 Towards A New Human Being
Tags: Luce Irigaray

With my own introduction and epilogue, Towards a New Human Being gathers original essays by early career researchers and established academic figures in response to To Be Born, my most recent book. The contributors approach key issues of this book from their own scientific fields and perspectives through calls for a different way of bringing up and educating children, the constitution of a new environmental and sociocultural milieu or the criticism of past metaphysics and the introduction of new themes into the philosophical horizon. However, all the essays which compose the volume correspond to proposals for the advent of a new human being so answering the subtitle of To Be Born: Genesis of a New Human Being. To Be Born thus acts as a background from which each author had the opportunity to develop and think in their own way. As such Towards a New Human Being is part of a longer-term undertaking in which I engaged together and in dialogue with more or less confirmed thinkers with a view to giving birth to a new human being and building a new world. Luce Irigaray