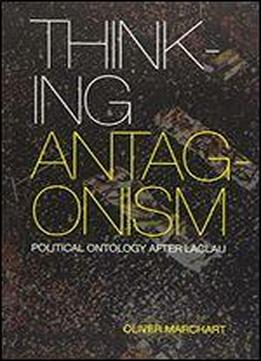 Discover Ernesto Laclau's theory of antagonism and how it contributes to political and cultural thought Ernesto Laclau (1935-2014) was one of the major theoretical voices on the Left. His concept of antagonism is the cornerstone of his theory of hegemony and the organising concept in his political ontology. Oliver Marchart presents the main features of this ontology and tracks the development of antagonism from German Idealism via Marx to today's post-Marxism. In doing so, he demonstrates Laclau's significant contribution to the current 'ontological turn' in political thought. By carving out the philosophical implications of antagonism, Marchart proposes a new theory of 'thinking' as a collective, political and conflictual practice.