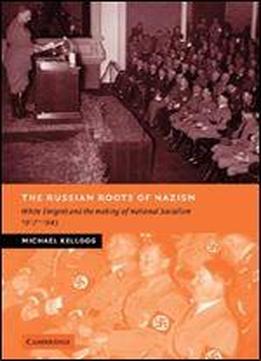 The Russian Roots Of Nazism: White Migrs And The Making Of National Socialism, 1917-1945
Tags: Michael Kellogg

This book examines the overlooked topic of the influence of anti-Bolshevik, anti-Semitic Russian exiles on Nazism. White migrs contributed politically, financially, militarily, and ideologically to National Socialism. This work refutes the notion that Nazism developed as a peculiarly German phenomenon: it arose primarily from the cooperation between vlkisch (nationalist/racist) Germans and vengeful White migrs. From 1920-1923, Adolf Hitler collaborated with a conspiratorial far right German-White migr organization, Aufbau (Reconstruction). Aufbau allied with Nazis to overthrow the German government and Bolshevik rule through terrorism and military-paramilitary schemes. This organization's warnings of the monstrous 'Jewish Bolshevik' peril helped to inspire Hitler to launch an invasion of the Soviet Union and to initiate the mass murder of European Jews. This book uses extensive archival materials from Germany and Russia, including recently declassified documents, and will prove invaluable reading for anyone interested in the international roots of National Socialism.