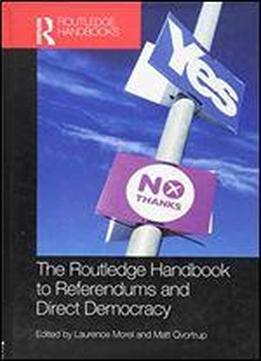 Over the last 30 years referendums have played an increasingly important role in determining government policy. Recent high profile referendums in Scotland, Catalonia and Ukraine have continued the movement towards independence referendums following decolonization and the end of the Cold War. The Greek bailout referendum and Britain's vote on membership of the EU reflect a tradition of European states giving their people a direct say in the transfer of sovereign powers to the European Union seen through the ratification of key treaties such as Maastricht, Amsterdam, Nice and Lisbon. This Routledge Handbook covers key aspects and issues of direct democracy and referendums throughout the world including: *their history *when, why, where, how and on which issues referendums are held *why some referendums are more democratic than others *how referendums are won *whether they produce good policies *if referendums increase participation and improve the quality of representative democracies *do referendums increase trust in democracy and the political actors *the impact of new technology on the possibilities, methods and frequency of direct public political participation *how they should be regulated. Covering other related areas such as recall, citizen juries and random selection, this compendium is an indispensable guide to referendums and the workings of modern democracy.