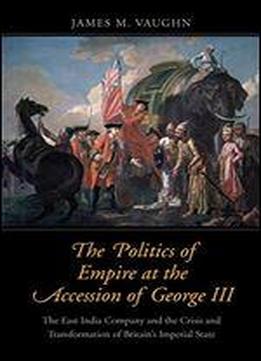 The Politics Of Empire At The Accession Of George Iii: The East India Company And The Crisis And Transformation Of Britain's Imperial State
Tags: James M. Vaughn

An important revisionist history that casts eighteenth-century British politics and imperial expansion in a new light. In this bold debut work, historian James M. Vaughn challenges the scholarly consensus that British India and the Second Empire were founded "in a fit of absence of mind." He instead argues that the origins of the Raj and the largest empire of the modern world were rooted in political conflicts and movements in Britain. It was British conservatives who shaped the Second Empire into one of conquest and dominion, emphasizing the extraction of resources and the subjugation of colonial populations. Drawing on a wide array of sources, Vaughn shows how the East India Company was transformed from a corporation into an imperial power in the service of British political forces opposed to the rising radicalism of the period. The Company's dominion in Bengal, where it raised territorial revenue and maintained a large army, was an autocratic bulwark of Britain's established order. A major work of political and imperial history, this volume offers an important new understanding of the era and its global ramifications.