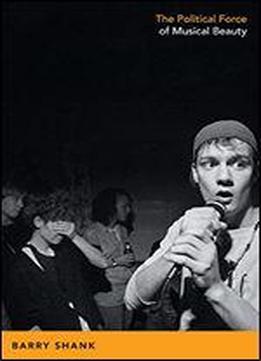 In The Political Force of Musical Beauty, Barry Shank shows how musical acts and performances generate their own aesthetic and political force, creating, however fleetingly, a shared sense of the world among otherwise diverse listeners. Rather than focusing on the ways in which music enables the circulation of political messages, he argues that communities grounded in the act and experience of listening can give rise to new political ideas and expression. Analyzing a wide range of beautiful music within popular and avant-garde genres-including the Japanese traditions in the music of Takemitsu Toru and Yoko Ono, the drone of the Velvet Underground, and the insistence of hardcore punk and Riot grrrl post-punk-Shank finds that when it fulfills the promise of combining sonic and lyrical differences into a cohesive whole, musical beauty has the power to reorganize the basis of social relations and produce communities that recognize meaningful difference.