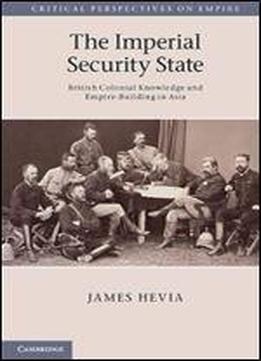 The Imperial Security State explores an important but under-explored dimension of British imperialism - its information system and the close links between military knowledge and the maintenance of empire. James Hevia's innovative study focuses on route books and military reports produced by the British Indian Army military intelligence between 1880 and 1940. He shows that together these formed a renewable and authoritative archive that was used to train intelligence officers, to inform civilian policy makers and to provide vital information to commanders as they approached the battlefield. The strategic, geographical, political and ethnographical knowledge that was gathered not only framed imperial strategies towards colonised areas to the east but also produced the very object of intervention: Asia itself. Finally, the book addresses the long-term impact of the security regime, revealing how elements of British colonial knowledge have continued to influence contemporary tactics of counterinsurgency in twenty-first-century Iraq and Afghanistan.