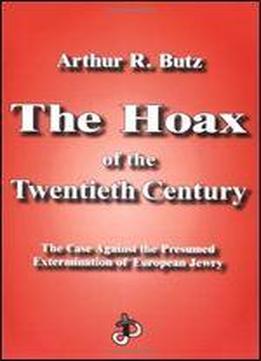 The Hoax Of The Twentieth Century: The Case Against The Presumed Extermination Of European Jewry
Tags: Arthur R. Butz

With his book Hoax of the Twentieth Century, A. R. Butz, Professor of Electrical Engineering and Computer Science, was the first (and so far the only) writer to treat the entire Holocaust complex from the Revisionist perspective, in a precise scientific manner. This book exhibits the overwhelming force of historical and logical arguments which Revisionism had accumulated by the middle of the 70s. It was the first book published in the US which won for Revisionism the academic dignity to which it is entitled. It continues to be a major revisionist reference work, frequently cited by prominent personalities. This new edition comes with several supplements adding new information gathered by the author over the last 25 years. Because of its prestige, no library can forbear offering The Hoax of the Twentieth Century, and no historian of modern times can ignore it. A 'must read' for every Revisionist and every newcomer to the issue who wants to thoroughly learn about revisionist arguments.