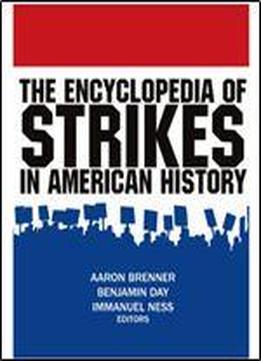 The Encyclopedia Of Strikes In American History
Tags: Aaron Brenner

Strikes have been part of American labor relations from colonial days to the present, reflecting the widespread class conflict that has run throughout the nation's history. Against employers and their goons, against the police, the National Guard, local, state, and national officials, against racist vigilantes, against their union leaders, and against each other, American workers have walked off the job for higher wages, better benefits, bargaining rights, legislation, job control, and just plain dignity. At times, their actions have motivated groundbreaking legislation, defining new rights for all citizens at other times they have led to loss of workers' lives. This comprehensive encyclopedia is the first detailed collection of historical research on strikes in America. To provide the analytical tools for understanding strikes, the volume includes two types of essays - those focused on an industry or economic sector, and those focused on a theme. Each industry essay introduces a group of workers and their employers and places them in their economic, political, and community contexts. The essay then describes the industry's various strikes, including the main issues involved and outcomes achieved, and assesses the impact of the strikes on the industry over time. Thematic essays address questions that can only be answered by looking at a variety of strikes across industries, groups of workers, and time, such as, why the number of strikes has declined since the 1970s, or why there was a strike wave in 1946. The contributors include historians, sociologists, anthropologists, and philosophers, as well as current and past activists from unions and other social movement organizations. Photos, a Topic Finder, a bibliography, and name and subject indexes add to the works appeal.