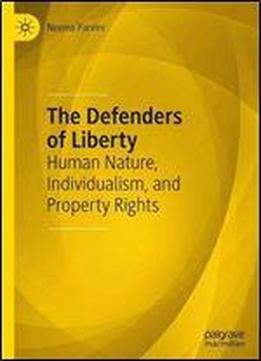 The Defenders of Liberty presents a history of economic liberalism from the Renaissance to the present. It chronicles the tradition of thought that sees human nature as social yet self-interested, methodological individualism as its key analytical tool, and property rights as foundational to a civilised society. In the development of this way of thinking, it considers the contributions of many key thinkers including Niccol Machiavelli, Thomas Hobbes, John Locke, Richard Cantillon, A.J.R. Turgot, David Hume, Adam Smith, Nassau William Senior, Richard Cobden, Herbert Spencer, Jean-Baptiste Say, Carl Menger, William Stanley Jevons, Gaetano Mosca, Eugen Bhm-Bawerk, Vilfredo Pareto, Phillip Wicksteed, Edwin Cannan, Ludwig von Mises, Lionel Robbins, F.A. Hayek, W.H. Hutt, Milton Friedman, George Stigler, Murray N. Rothbard, James M. Buchanan, and Thomas Sowell. The book contends that liberalism needs to be grounded in realism, and that it has been derailed whenever economists have deviated from an explicitly realist understanding of human nature, individualism and property rights. It argues that the cause of liberalism was compromised by errors in economic reasoning by such major figures as David Ricardo, John Stuart Mill, Alfred Marshall, A.C. Pigou, and John Maynard Keynes. In diagnosing what has gone wrong for liberalism in the twenty-first century, The Defenders of Liberty argues against substituting mathematical abstraction for causal realism it opposes interventionist central banking it seeks to recover economic liberalism from social and political liberalism, which are somewhat unrelated schools of thought it resists a view of human nature rooted in selfishness or atomised individualism and finally alerts defenders of freedom to the ruthless but effective language games played by their opponents. This book will be of interest to the educated general reader as well as undergraduates and postgraduates in disciplines such as economics, political theory and philosophy.