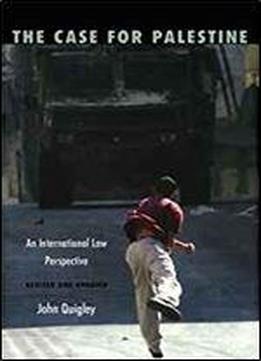 John Quigley brings a necessary international law perspective to bear on the seemingly intractable Israeli-Palestinian conflict in this updated edition of his important book. Since 2000, the cycle of bloodshed and retribution has spiraled increasingly out of control. Quigley attributes the breakdown of negotiations in 2000 to Israel’s unwillingness to negotiate on the basis of principles of justice and law. He argues that throughout the last century, established tenets of international law—and particularly the right of self-determination—have been overlooked or ignored in favor of the Zionists and then the Israelis, to the detriment of the Palestinians. In this volume, Quigley provides a thorough understanding of both sides of the conflict in the context of international law. He contends that the Palestinians have a stronger legal claim to Jerusalem than do the Israelis that Palestinian refugees should be repatriated to areas including those within the borders of Israel and that Israel should withdraw from the territory it occupied in 1967. As in his earlier volume, Quigley provides an extensively documented evaluation of the conflict over the last century, discussing the Zionist movement, the League of Nations’ decision to promote a Jewish homeland in Palestine, the 1948 war and creation of Israel, and Israel’s occupation of the West Bank, Gaza Strip, and Golan Heights during the 1967 war.