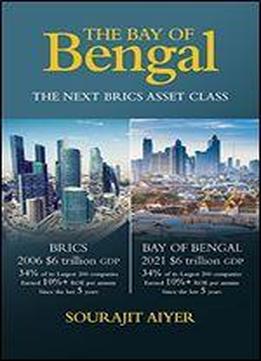 The Bay Of Bengal: The Next Brics Asset Class
Tags: Sourajit Aiyer

The success of any regional economic story depends on how much the political economy and financial economy complement each other. The BRIC grouping (Brazil, Russia, India and China) was deemed to be at a similar stage of newly advanced economic development when Goldman Sachs coined the acronym in 2001. As a new asset class for the financial economy, portfolio funds were launched and as a consequence political economic initiatives lent the BRIC grouping status and cohesiveness. The Bay of Bengal: The Next BRICS Asset Class has been written to demonstrate the economic potential of the grouping, and the benefits of creating a distinct asset class. The author compares economic/corporate performance data of the Bay of Bengal (BoB) grouping with other regions of developing countries (BRICS, ASEAN, SAARC, EAC, MENA, EEC, CIS, MINT, CIVETS, Pacific Alliance, etc.) to show that the Bengal group is expected to reach a combined GDP of $6 trillion by 2021, just as the BRICS did in 2006 (five years after BRIC was coined). The BoB grouping has relatively the best linear/synchronised growth, a high proportion of companies generating consistent profits/return on equity, a more diversified profit pool and a fair mix of economic-growth drivers compared to other economic groupings. The economic relevance of this region is clear and statistically substantiated, and The Next BRICS Asset Class sets out to reverse the current lack of awareness amongst the financial economy. The author's aim is to justify the economic substance of this grouping so that it complements the political economy's initiatives that will follow.