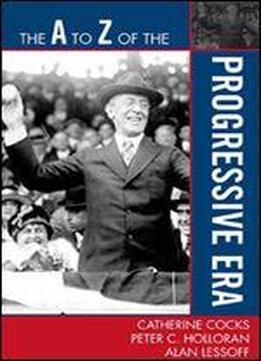 The A To Z Of The Progressive Era
Tags: Catherine Cocks

The Progressive Era, the period in the United States between 1898 and 1917, was a time of great social, political, and industrial change. Following the Spanish-American War of 1898, an event that signaled the emergence of the United States as a great power, the country soon was involved in its first overseas guerrilla war, in the Philippines. Vast changes in communications and transportation, immigration and migration patterns, social mores, gender roles, family structure, class structure, work patterns, business methods, education, intellectual life, religion, the professions, technology, science, medicine, and much else were transforming the scope and feel of people's lives and relationships. In many ways what happened in this era set the agenda for the rest of the 20th century. The A to Z of the Progressive Era is the most comprehensive and coherent reference work on the Progressive Era. Through its chronology, introductory essay, bibliography, appendixes, and hundreds of cross-referenced dictionary entries on the key events, people, organizations, and ideas of the period, this resource is a lively, complete, and accessible overview of this significant era. About the Author Catherine Cocks is an independent scholar. Peter Holloran is associate professor of history at Worcester State College. Alan Lessoff is professor of history at Illinois State University and editor of the Journal of the Gilded Age and Progressive Era.