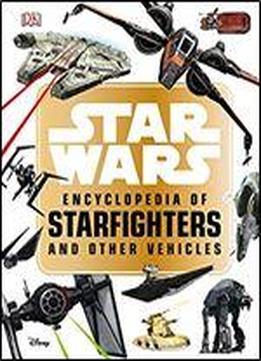 The definitive guide to the vehicles from a galaxy far, far away... Learn all about your favorite Star Wars(TM) vehicles, from the A-wing to the Y-wing. Don't know your X-wing from your Y-wing? Not sure what type of craft Slave I is? Look no further than the Star Wars Encyclopedia of Starfighters and Other Vehicles. From the swamps of Kashyyyk to the deserts of Jakku, from inner-city Coruscant to the vastness of hyperspace, this new Star Wars book will show you the right craft for the job. This handy guide is full of fun facts and intriguing information, guaranteed to enthrall fans for hours on end. This encyclopedia features more than 200 weird and wonderful vehicles from the world of Star Wars, including ships and vehicles from the entire saga of movies as well as the television series Star Wars: The Clone Wars and Star Wars: Rebels. One vehicle is explored in detail on each page, so there's something new even for die-hard fans. All the technology behind the vehicles such as repulsorlift craft and hyperspeed is fully explored.