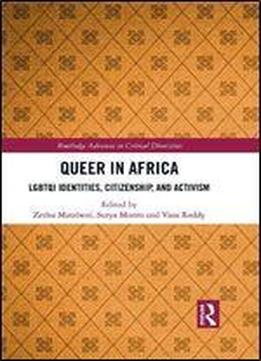 African sexualities are dynamic, multi-faceted and resilient. However, people with non-heterosexual sexualities and gender variant identities are often involved in struggles for survival, self-definition, and erotic rights. Queer in Africa forms an entry point for understanding the vulnerabilities of queer Africans as shaped by social, cultural and political processes, aiming to provide innovative insights about contentious disagreements over their lives. The volume mediates Southern and Northern scholarship, directing attention toward African-centred beliefs made accessible to a wide audience. Key concerns such as identity construction and the intersections between different social forces (such as nationalist traditionalism and sexualities) are addressed via engaging chapters some empirically based and others providing critical cultural analysis. Highly interdisciplinary in nature, Queer in Africa provides a key resource for students, academics, and activists concerned with the international support of sex and gender diversity. It will appeal to those interested in fields such as anthropology, film studies, literary studies, political science, public health, sociology, and socio-legal studies.