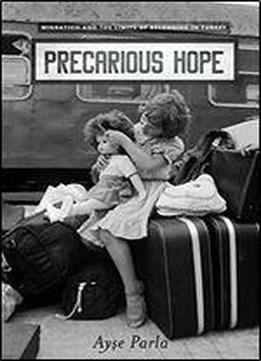 Precarious Hope: Migration And The Limits Of Belonging In Turkey
Tags: Ayse Parla

There are more than 700,000 Bulgaristanl migrants residing in Turkey. Immigrants from Bulgaria who are ethnically Turkish, they assume certain privileges because of these ethnic ties, yet access to citizenship remains dependent on the whims of those in power. Through vivid accounts of encounters with the police and state bureaucracy, of nostalgic memories of home and aspirations for a more secure life in Turkey, Precarious Hope explores the tensions between ethnic privilege and economic vulnerability and rethinks the limits of migrant belonging among those for whom it is intimated and promised but never guaranteed. In contrast to the typical focus on despair, Aye Parla studies the hopefulness of migrants. Turkish immigration policies have worked in lockstep with national aspirations for ethnic, religious, and ideological conformity, offering Bulgaristanl migrants an advantage over others. Their hope is the product of privilege and an act of dignity and perseverance. It is also a tool of the state, reproducing a migration regime that categorizes some as desirable and others as foreign and dispensable. Through the experiences of the Bulgaristanl, Precarious Hope speaks to the global predicament in which increasing numbers of people are forced to manage both cultivation of hope and relentless anxiety within structures of inequality.