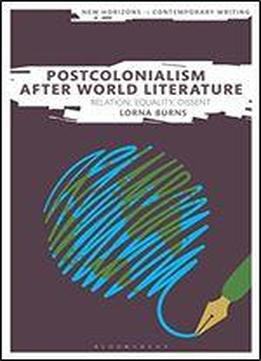 Postcolonial studies took shape in response to the nationalist and decolonization movements of the twentieth century. Today, a resurgent interest in world literature reflects an increased awareness of globalization. These twin projects are torn between a criticism that finds in the text the trace of capitalist modernity and one that accounts for the revolutionary potential of literature to challenge our global present. Postcolonialism After World Literature exposes what is at stake in this critical choice through a line of philosophical enquiry Bruno Latour, Gilles Deleuze, and Jacques Rancire that poses an alternative to the materialist strand of world literary criticism pioneered by Pascale Casanova and Franco Moretti. Engaging with these theorists and others, Lorna Burns contests world-systems theory as the basis for thinking about contemporary postcolonial and world literatures, and proposes a renewed framework that promotes literature's capacity to provoke dissent to imagine new forms of belonging and relation for both national and world citizens and to stage the shared equality of all. Moving between theory and the novels of Roberto Bolao, J. M. Coetzee, Kamel Daoud, Dany Laferrire, Pauline Melville, Arundhati Roy and Kamila Shamsie, Postcolonialism After World Literature presents the case for rethinking world literature in light of the legacies of postcolonialism, and for reshaping postcolonial studies in an era of world literature. Lorna Burns is Lecturer in Postcolonial Literatures at the University of St Andrews, UK. She is the author of Contemporary Caribbean Writing and Deleuze (Bloomsbury, 2012).