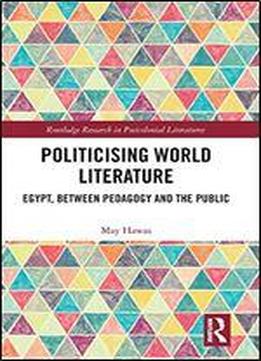 Politicising World Literature: Egypt, Between Pedagogy And The Public
Tags: May Hawas

Politicising World Literature: Egypt, Between Pedagogy and the Public engages with postcolonial and world literature approaches to examine the worldly imaginary of the novel genre and assert the political imperative to teaching world literature. How does canonising world literature relate to societal, political or academic reform? Alternating between close reading of texts and literary history, this monograph studies a corpus of novels and travelogues in English, Arabic, French, Czech and Italian to historicise Egypt's literary relations with different parts of the world in both the modern period and the pre-modern period. In this rigorous study, May Hawas argues that protagonists, particularly in times of political crises, locate themselves as individuals with communal or political affiliations that supersede, if not actually resist, national affiliations.