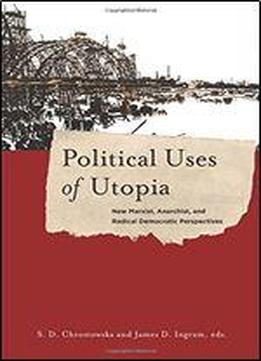 Utopia has long been banished from political theory, framed as an impossibleand possibly dangerouspolitical ideal, a flawed social blueprint, or a thought experiment without any practical import. Even the "realistic utopias" of liberal theory strike many as wishful thinking. Can politics think utopia otherwise? Can utopian thinking contribute to the renewal of politics? In Political Uses of Utopia, an international cast of leading and emerging theorists agree that the uses of utopia for politics are multiple and nuanced and lie somewhere betweenor, better yet, beyondthe mainstream caution against it and the conviction that another, better world ought to be possible. Representing a range of perspectives on the grand tradition of Western utopianism, which extends back half a millennium and perhaps as far as Plato, these essays are united in their interest in the relevance of utopianism to specific historical and contemporary political contexts. Featuring contributions from Miguel Abensour, tienne Balibar, Raymond Geuss, and Jacques Rancire, among others, Political Uses of Utopia reopens the question of whether and how utopianism can inform political thinking and action today.