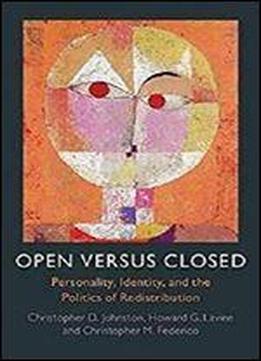 Debates over redistribution, social insurance, and market regulation are central to American politics. Why do some citizens prefer a large role for government in the economic life of the nation while others wish to limit its reach? In Open versus Closed, the authors argue that these preferences are not always what they seem. They show how deep-seated personality traits underpinning the culture wars over race, immigration, law and order, sexuality, gender roles, and religion shape how citizens think about economics, binding cultural and economic inclinations together in unexpected ways. Integrating insights from both psychology and political science - and twenty years of observational and experimental data - the authors reveal the deeper motivations driving attitudes toward government. They find that for politically active citizens these attitudes are not driven by self-t, but by a desire to express the traits and cultural commitments that define their identities.