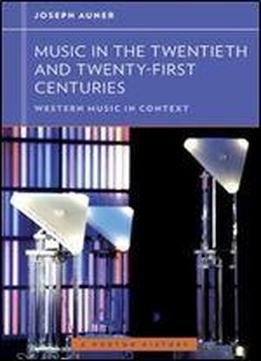 Music In The Twentieth And Twenty-first Centuries
Tags: Joseph Auner

The music of the twentieth and twenty-first centuries in its cultural, social, and intellectual contexts. Joseph Auner's Music in the Twentieth and Twenty-First Centuries explores the sense of possibility unleashed by the era's destabilizing military conflicts, social upheavals, and technological advances. Auner shows how the multiplicity of musical styles has called into question traditional assumptions about compositional practice, the boundaries of music and noise, and the relationship among composer, performer, and listener. He also shows how composers and their works have played important roles in defining ideas of nation, race, and gender, and thus in shaping the modern world for better and worse. Western Music in Context: A Norton History comprises six volumes of moderate length, each written in an engaging style by a recognized expert. Authoritative and current, the series examines music in the broadest senseas sounds notated, performed, and heardfocusing not only on composers and works, but also on broader social and intellectual currents.