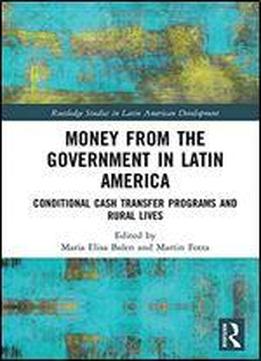 It has been almost two decades since conditional cash transfer programs first appeared on the agendas of multilateral agencies and politicians. Latin America has often been used as a testing ground for these programs, which consist of transfers of money to subsections of the population upon meeting certain conditions, such as sending their children to school or having them vaccinated. Money from the Government in Latin America takes a comparative view of the effects of this regular transfer of money, which comes with obligations, on rural communities. Drawing on a variety of data, taken from different disciplinary perspectives, these chapters help to build an understanding of the place of conditional cash transfer programsin rural families and households, in individuals' aspirations and visions, in communities' relationships to urban areas, and in the overall character of these rural societies. With case studies from Chile, Mexico, Peru, Brazil and Colombia, this book will interest scholars and researchers of Latin American anthropology, sociology, development, economics and politics.