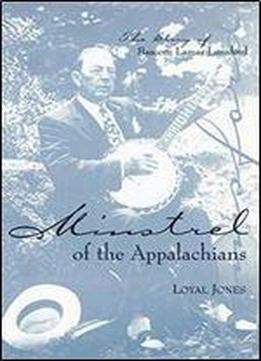 Minstrel Of The Appalachians: The Story Of Bascom Lamar Lunsford
Tags: Loyal Jones

It is said that Bascom Lamar Lunsford would "cross hell on a rotten rail to get a folk song"his Southern highlands folk-song compilations now constitute one of the largest collections of its kind in the Library of Congressbut he did much more than acquire songs. He preserved and promoted the Appalachian mountain tradition for generations of people, founding in 1928 the Mountain Dance and Folk Festival in Asheville, North Carolina, an annual event that has shaped America's festival movement. Loyal Jones pens a lively biography of a man considered to be Appalachian music royalty. He also includes a "Lunsford Sampler" of ballads, songs, hymns, tales, and anecdotes, plus a discography of his recordings.