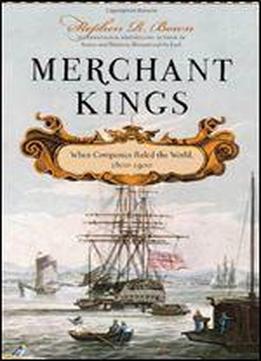 Commerce meets conquest in this swashbuckling story of the six merchant-adventurers who built the modern world It was an era when monopoly trading companies were the unofficial agents of European expansion, controlling vast numbers of people and huge tracts of land, and taking on governmental and military functions. They managed their territories as business interests, treating their subjects as employees, customers, or competitors. The leaders of these trading enterprises exercised virtually unaccountable, dictatorial political power over millions of people. The merchant kings of the Age of Heroic Commerce were a rogue's gallery of larger-than-life men who, for a couple hundred years, expanded their far-flung commercial enterprises over a sizable portion of the world. They include Jan Pieterszoon Coen, the violent and autocratic pioneer of the Dutch East India Company Peter Stuyvesant, the one-legged governor of the Dutch West India Company, whose narrow-minded approach lost Manhattan to the British Robert Clive, who rose from company clerk to become head of the British East India Company and one of the wealthiest men in Britain Alexandr Baranov of the Russian American Company Cecil Rhodes, founder of De Beers and Rhodesia and George Simpson, the Little Emperor of the Hudson's Bay Company, who was chauffeured about his vast fur domain in a giant canoe, exhorting his voyageurs to paddle harder so he could set speed records. Merchant Kings looks at the rise and fall of company rule in the centuries before colonialism, when nations belatedly assumed responsibility for their commercial enterprises. A blend of biography, corporate history, and colonial history, this book offers a panoramic, new perspective on the enormous cultural, political, and social legacies, good and bad, of this first period of unfettered globalization.