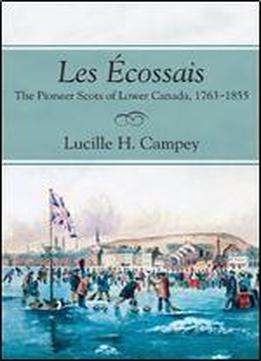 This is the first fully documented account, produced in modern times, of the migration of Scots to Lower Canada. Scots were in the forefront of the early influx of British settlers, which began in the late eighteenth century. John Nairne and Malcolm Fraser were two of the first Highlanders to make their mark on the province, arriving at La Malbaie soon after the Treaty of Paris in 1763. By the early 1800s many Scottish settlements had been formed along the north side of the Ottawa River, in the Chateauguay Valley to the southwest of Montreal, and in the Gaspe region. Then, as economic conditions in the Highlands and Islands deteriorated by the late 1820s, large numbers of Hebridean crofters settled in the Eastern Townships. The first group came from Arran and the later arrivals from Lewis. Les Ecossais were proud of their Scottish traditions and customs, those living reminders of the old country which had been left behind. In the end they became assimilated into Quebec's French-speaking society, but along the way they had a huge impact on the province's early development. How were les Ecossais regarded by their French neighbours? Were they successful pioneers? In her book, Lucille H. Campey assesses their impact as she unravels their story. Drawing from a wide range of fascinating sources, she considers the process of settlement and the harsh realities of life in the New World. She explains how Quebec province came to acquire its distinctive Scottish communities and offers new insights on their experiences and achievements.