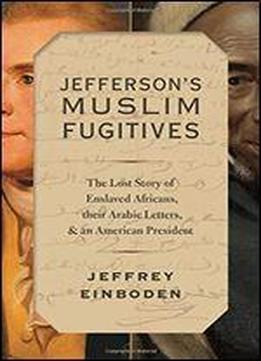 "On October 3, 1807, Thomas Jefferson was contacted by an unknown traveler from the American frontier, who urgently requested a private "interview" with the President, promising to disclose "a matter of momentous importance". By the next day, Jefferson held in his hands two astonishing manuscripts whose history has been lost for over two centuries. Authored by Muslims fleeing captivity in rural Kentucky, these documents delivered to the President in 1807 were penned by literate African slaves, and written entirely in Arabic. Jefferson's Muslim Fugitives reveals the untold story of two escaped West Africans in the American heartland whose Arabic writings reached a sitting U.S. President, prompting him to intervene on their behalf. Recounting a quest for emancipation that crosses borders of race, region and religion, Jeffrey Einboden unearths Arabic manuscripts that circulated among Jefferson and his prominent peers, including a document from 1780s Georgia identified as the earliest surviving example of Muslim slave authorship in the newly-formed United States. Revealing Jefferson's lifelong entanglements with Islam and captivity, Jefferson's Muslim Fugitives tracks the ascent of Arabic slave writings to the highest halls of U.S. power, while questioning why such vital legacies from the American past have been entirely forgotten."