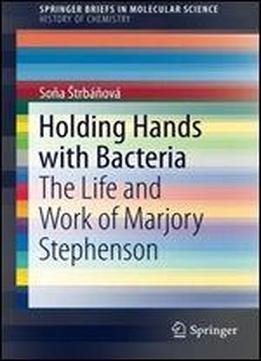 This biographical brief outlines the remarkable life and career of British biochemist, Marjory Stephenson (1885-1948). In nine concise chapters, Strbanova describes Stephenson's scientific accomplishments and sets these against the socio-political challenges of the time. Stephenson played an important role in the development of biochemistry and molecular biology. She was one of the first scientists to use microorganisms as models for research into cellular biochemical processes and their regulation. Later she went on to coin the term chemical microbiology, which was communicated in her monograph and textbook "Bacterial Metabolism" (1930-1949). Stephenson also actively participated in the establishment of the institutionalized interdisciplinary field of general microbiology which integrated research into diverse forms of microorganisms at various levels of organization. Alongside these scientific achievements, Strbanova outlines Stephenson's constant battle with practices of undeclared discrimination, her important role as one of the first women science managers and organizers, and her influential position within the scientific community. A scientist of great merit and a role model to women scientists of all disciplines, the life of Marjory Stephenson is of interest to biochemists, molecular biologists, historians of the chemical and biological sciences, and women scientists of all generations.