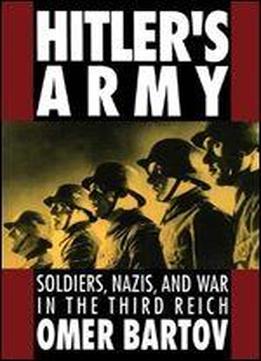 With liberal quotes from letters, diaries and military reports, Bartov successfully challenges the notion that the German army during WW II was apolitical and reveals how thoroughly permeated it was by Nazi ideology. Focusing on ordinary German soldiers on the Eastern front, he shows how government propaganda and indoctrination motivated the troops not only to fight well but to commit unprecedented crimes against humanity. This institutionalized brainwashing revolved around two interrelated elements: the radical demonization of the Soviet enemy and the deification of the fuhrer. Consequently, most of the troops believed the war in the Eastern theater was a struggle to dam the Jewish/Bolshevik/Asiatic flood that threatened Western civilization. This scholarly paper by a junior fellow with the Society of Fellows, Harvard University, demonstrates how Germany's soldiers were transformed into brutal instruments of a barbarous policy.

A Most Accursed Religion: When A Trauma ...

The Secret Life Of Germs: What They ...

A Course On Partial Differential Equations

The Self-discipline Blueprint: A Simple Guide To ...