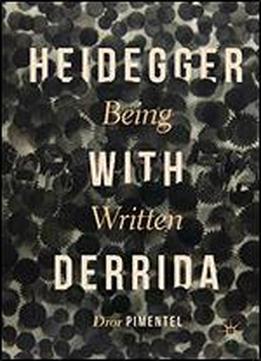 Heidegger with Derrida: Being Written attempts, for the first time, to think Heidegger's philosophy through the lens of Derrida's logocentric thesis, according to which speech has, throughout the history of metaphysics, been given primacy over writing. The book offers a detailed account of Derrida's arguments about the debasement of writing, an account that leads to a new definition of writing, conceiving it epistemically, rather than linguistically. Heidegger's analysis of the gaze and critique of the modern subject are shown to have logocentric features. This surprising conclusion entails that Heidegger is well within the metaphysical tradition, which he labored so intently to overcome. The book sheds new light on the philosophical roots of Heideggers involvement with Nazism, arguing that his hierarchical thinking the hallmark of logocentrism and metaphysicscondones violent differentiation between the proper race and the Other.