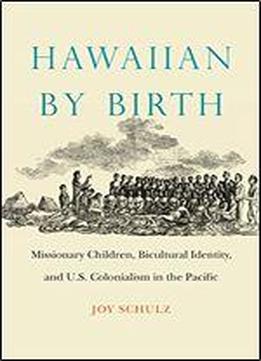 Twelve companies of American missionaries were sent to the Hawaiian Islands between 1819 and 1848 with the goal of spreading American Christianity and New England values. By the 1850s American missionary families in the islands had birthed more than 250 white children, considered Hawaiian subjects by the indigenous monarchy and U.S. citizens by missionary parents. In Hawaiian by Birth Joy Schulz explores the tensions among the competing parental, cultural, and educational interests affecting these children and, in turn, the impact the children had on nineteenth-century U.S. foreign policy. These children of white missionaries would eventually alienate themselves from the Hawaiian monarchy and indigenous population by securing disproportionate economic and political power. Their childhoodscomplicated by both Hawaiian and American influencesled to significant political and international ramifications once the children reached adulthood. Almost none chose to follow their parents into the missionary profession, and many rejected the Christian faith. Almost all supported the annexation of Hawaii despite their parents hope that the islands would remain independent. Whether the missionary children moved to the U.S. mainland, stayed in the islands, or traveled the world, they took with them a sense of racial privilege and cultural superiority. Schulz adds childrens voices to the historical record with this first comprehensive study of the white children born in the Hawaiian Islands between 1820 and 1850 and their path toward political revolution.