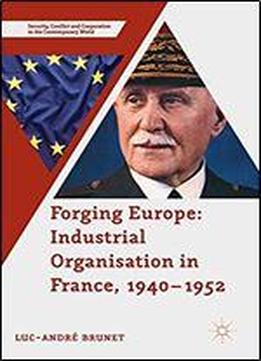 This book is a detailed and original look at the radical reorganisation of French heavy industry in the turbulent period between the establishment of the Vichy regime in 1940 and the creation of the European Coal and Steel Community (ECSC), the forerunner to the European Union, in 1952. By studying institutions ranging from Vichy’s Organisation Committees to Jean Monnet’s Commissariat General du Plan (CGP), Luc-Andre Brunet challenges existing narratives and reveals significant continuities from Vichy to post-war initiatives such as the Monnet Plan and the ECSC. Based on extensive multi-archival research, this book sheds important new light on economic collaboration and resistance in Vichy, the post-war revival of the French economy, and the origins of European integration.