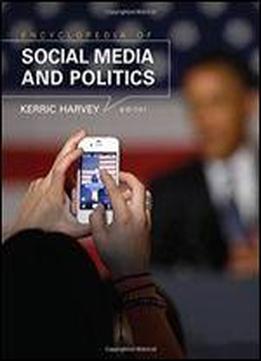 The Encyclopedia of Social Media and Politics explores how the rise of social media is altering politics both in the United States and in key moments, movements, and places around the world. Its scope encompasses the disruptive technologies and activities that are changing basic patterns in American politics and the amazing transformations that social media use is rendering in other political systems heretofore resistant to democratization and change. In a time when social media are revolutionizing and galvanizing politics in the United States and around the world, this encyclopedia is a must-have reference. It reflects the changing landscape of politics where old modes and methods of political communication from elites to the masses (top down) and from the masses to elites (bottom up) are being displaced rapidly by social media, and where activists are building new movements and protests using social media to alter mainstream political agendas. Key Features This three-volume A-to-Z encyclopedia set includes 600 short essays on high-interest topics that explore social medias impact on politics, such as Activists and Activism, Issues and Social Media, Politics and Social Media, and Popular Uprisings and Protest. A stellar array of world renowned scholars have written entries in a clear and accessible style that invites readers to explore and reflect on the use of social media by political candidates in this country, as well as the use of social media in protests overseas Unique to this book is a detailed appendix with material unavailable anywhere else tracking and illustrating social media usage by U.S. Senators and Congressmen. This encyclopedia set is a must-have general, non-technical resource for students and researchers who seek to understand how the changes in social networking through social media are affecting politics, both in the United States and in selected countries or regions around the world.