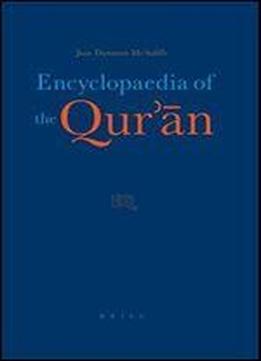 The Qur'an is the primary religious text for one-sixth of the world's population. Understood by Muslims to contain God's own words, it has been an object of reverence and of intense study for centuries. The thousands of volumes that Muslim scholars have devoted to qur'anic interpretation and to the linguistic, rhetorical and narrative analysis of the text are sufficient to create entire libraries of qur'anic studies. Drawing upon a rich scholarly heritage, Brill's "Encyclopaedia of the Qur'an" (EQ) combines alphabetically-arranged articles about the contents of the Qur'an. It is an encyclopaedic dictionary of qur'anic terms, concepts, personalities, place names, cultural history and exegesis extended with essays on the most important themes and subjects within qur'anic studies. With nearly 1000 entries in 5 volumes, the "EQ" is the first comprehensive, multi-volume reference work on the Qur'an to appear in a Western language. Cross-referencing and indices, frequent cross-references will draw readers to related entries and each article will conclude with a citation of relevant bibliography. The final volume of the "EQ" will contain indices of transliterated terms, of qur'anic references and of the authors and exegetes cited in the entries and essays. It will also include a synoptic outline of the full contents of the "EQ". "The EQ" is a fully international work supported by an international board of advisors. Scholars from many nations have written articles for the encyclopaedia. Projected Publication Dates: Volume One (A-D): In print, Volume Two (E-I): In print, Volume Three (J-O): In print 2003, Volume Four (P-Sh): In print 2004, and Volume Five: Fall 2005.