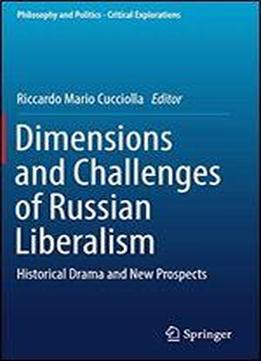 Liberalism in Russia is one of the most complex, multifaced and, indeed, controversial phenomena in the history of political thought. Values and practices traditionally associated with Western liberalismsuch as individual freedom, property rights, or the rule of lawhave often emerged ambiguously in the Russian historical experience through different dimensions and combinations. Economic and political liberalism have often appeared disjointed, and liberal projects have been shaped by local circumstances, evolved in response to secular challenges and developed within often rapidly-changing institutional and international settings. This third volume of the Reset DOC Russia Workshop collects a selection of the Dimensions and Challenges of Russian Liberalism conference proceedings, providing a broad set of insights into the Russian liberal experience through a dialogue between past and present, and intellectual and empirical contextualization, involving historians, jurists, political scientists and theorists. The first part focuses on the Imperial period, analyzing the political philosophy and peculiarities of pre-revolutionary Russian liberalism, its relations with the rule of law (Pravovoe Gosudarstvo), and its institutionalization within the Constitutional Democratic Party (Kadets). The second part focuses on Soviet times, when liberal undercurrents emerged under the surface of the official Marxist-Leninist ideology. After Stalins death, the thaw intelligentsia of Soviet dissidents and human rights defenders represented a new liberal dimension in late Soviet history, while the reforms of Gorbachevs New Thinking became a substitute for liberalism in the final decade of the USSR. The third part focuses on the time of troubles under the Yeltsin presidency, and assesses the impact of liberal values and ethics, the bureaucratic difficulties in adapting to change, and the paradoxes of liberal reforms during the transition to post-Soviet Russia. Despite Russian liberals having begun to draw lessons from previous failures, their project was severely challenged by the rise of Vladimir Putin. Hence, the fourth part focuses on the 2000s, when the liberal alternative in Russian politics confronted the ascendance of Putin, surviving in parts of Russian culture and in the mindset of technocrats and system liberals. Today, however, the Russian liberal project faces the limits of reform cycles of public administration, suffers from a lack of federalist attitude in politics and is externally challenged from an illiberal world order. All this asks us to consider: what is the likelihood of a reboot of Russian liberalism?