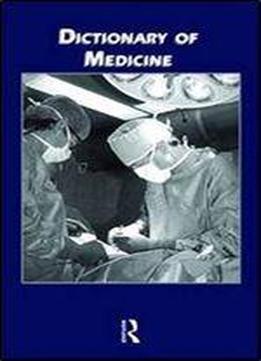 First Published in 1999. Routledge is an imprint of Taylor &amp; Francis, an informa company. PREFACE TO THE FIRST EDITION This dictionary provides the user with the basic vocabulary used in British and American medical practice. The subject matter covers terms used in surgery, general practice, hospitals, nursing, pharmacy, dentistry and other specializations. The level of language varies from the very technical to informal usage as between professionals or between professionals and patients. Each of the 12,000 headwords is defined in simple English, using a limited vocabulary of 500 words over and above those words which actually appear in the dictionary as main words. Very many examples are given to show how the words and phrases are used in context, and many of the more difficult phrases are also explained in simple and clear English. Words which pose particular grammatical problems have short grammar notes attached, giving irregular forms, and notes on constructions, together with differences between British and American English where appropriate. Comments are also given for many words with notes on symptoms and treatment, as well as more encyclopaedic information. Some of the anatomical features are illustrated by line drawings. Also included in the text are quotations from medical journals and magazines from various parts of the world to show how the language is used in practice. At the back of the book are a series of supplements which give useful information in tabular form: these refer to vitamins, incubation periods, SI equivalents, diets, and notes on eponymous words. Very many people have helped or advised on the compilation and checking of this dictionary: in particular we would like to thank G. H. Hooton (who provided most of the supplementary material). Erica Ison, Dr. G. Lewis and Dr. D. W. Macintosh. Illustrations are by SM Design. PREFACE TO THE SECOND EDITION The text of the original edition has been entirely revised and updated, with the addition of many new entries. We are grateful again to G. H. Hooton for his contributions, and to Hazel Curties who provided much new material