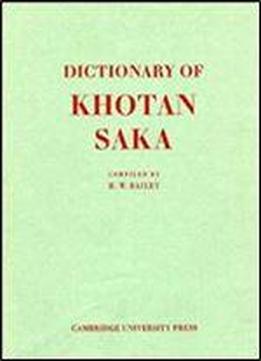 The Cambridge University Press published (1945-1967) in six volumes Professor Bailey's transcriptions of Saka manuscripts found in Sin Kiang and Kansu (of the ancient kingdom of Khotan). They are central to any study of Old Iranian and the Iranian dialects and they are also important for further understanding of the religious tradition in the sacred Avesta of the Zoroastrians, and for the history of the peoples of Central Asia generally. This 1979 dictionary represents the fulfilment of a plan formed in 1934 which required first the editing and transcription of the manuscripts, and then the slow elucidation of the whole corpus of texts. It contains a linguistic analysis and translation of all the Iranian words used in the texts. It is the necessary key to the understanding of the texts, to the mastery of the language itself, and to the linking of Khotan Saka into the Indo-European linguistic tradition.