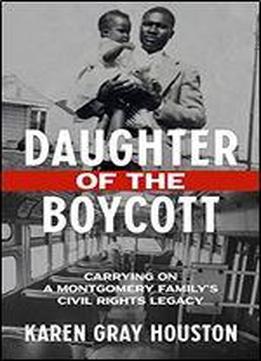 In 1950, before Montgomery knew Martin Luther King Jr., before Rosa Parks refused to surrender her bus seat to a white passenger, before the city's famous boycott, a Negro man named Hilliard Brooks was shot and killed by a white policeman during an encounter involving a ride on a city bus. Brooks and Thomas Gray played football together as kids. Gray and other fellow veterans, outraged about an unjustifiable fatal shooting, protested, eventually staging a major march against police brutality downtown. Five years later, Gray protested again, this time against the unjust treatment of Negroes on the city's segregated buses. Daughter of the Boycott is Karen Gray Houston's story of her family's involvement in the historic Montgomery bus boycott, the action that kick-started the civil rights movement. Her father, Thomas W. Gray Sr., and her uncle, Fred D. Gray, were boycott leaders. Fred, fresh out of law school, represented Martin Luther King Jr., Rosa Parks, and rarely mentioned teenage activist Claudette Colvin, a named plaintiff in Browder v. Gayle, the Supreme Court case that forced Alabama to desegregate its buses. Only as an adult did Houston begin to appreciate how, in the face of threats and bombings, their bold, selfless actions helped change the nation's racial climate, opening doors of opportunity for her and countless others. They were opportunities that opened previously blocked segregated doors and allowed her, an African American woman, to embark on a career as a broadcast journalist. Daughter of the Boycott takes the reader on a journey through the struggles Houston's family faced before and after the boycott, including the violence and setbacks. With the trained eye of an investigative reporter, she gives voice to the lives affected by this historical moment.