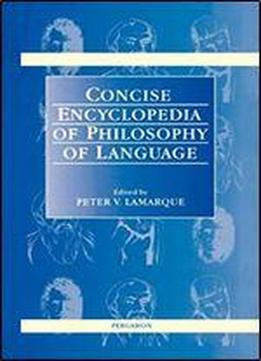 Philosophers have had an interest in language from the earliest times but the twentieth century, with its so-called 'linguistic turn' in philosophy, has seen a huge expansion of work focused specifically on language and its foundations. No branch of philosophy has been unaffected by this shift of emphasis. It is timely at the end of the century to review and assess the vast range of issues that have been developed and debated in this central area. The distinguished international contributors present a clear, accessible guide to the fundamental questions raised by the philosophers about language. Contributions include Graeme Forbes on necessity, Susan Haack on deviant logics, Paul Horwich on truth, Charles Travis on Wittgenstein, L.J. Cohen on linguistic philosophy, Ruth Kempson on semantics and syntax and Christopher Hookway on ontology, to name but a few. A wide range of topics are covered from the metaphysics and ontology of language, language and mind, truth and meaning, to theories or reference, speech act theory, philosophy of logic and formal semantics. There are also articles on key figures from the twentieth century and earlier. Based on the foundation provided by the award-winning Encyclopedia of Language and Linguistics this single volume provides a collection of articles that will be an invaluable reference tool for all those interested in the area of philosophy of language, and also to those in cognitive science and psychology. All the articles have been thoroughly revised and updated. This volume gives a unique survey of topics that are at the very core of contemporary philosophy.