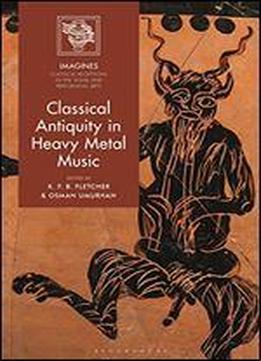 This book demonstrates the rich and varied ways in which heavy metal music draws on the ancient Greek and Roman world. Bands including Italy's Stormlord and Heimdall, Greece's Kawir, Switzerland's Eluveitie and Celtic Frost, Norway's Theatre of Tragedy, Sweden's Therion, Germany's Blind Guardian, Canada's Ex Deo and the UK's Iron Maiden and Bal-Sagoth are shown to draw inspiration from classical literature and mythology such as Homer's Iliad, Virgil's Aeneid and Caesar's Gallic Wars and from historical peoples such as the Scythians, ancient Egypt and Roman emperors. These interactions are often concerned with the nature of paganism, the occult and barbarism, nationalism, the conflict between East and West, as well as developing powerful evocations of brutality and femininity. The contributors frequently weave in comparisons with the reception of antiquity in painting and literature to show how the genre of heavy metal brings its own perspectives to classical reception but also shows strands of continuity of practice. They show how this musical genre often dismissed as lowbrow engages in sophisticated dialogue with ancient texts, myths, and historical figures, revealing aspects of Classics' continued appeal while also arguing that the engagement with myth and history is a defining characteristic of heavy metal music, especially in countries that were once part of the Roman Empire.