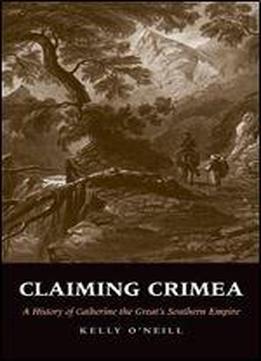 The first comprehensive, archive-based history of Russia's original annexation of Crimea and its predominantly Muslim population more than two hundred years ago Russia's long-standing claims to Crimea date back to the eighteenth-century reign of Catherine II. Historian Kelly O'Neill has written the first archive-based, multi-dimensional study of the initial "quiet conquest" of a region that has once again moved to the forefront of international affairs. O'Neill traces the impact of Russian rule on the diverse population of the former khanate, which included Muslim, Christian, and Jewish residents. She discusses the arduous process of establishing the empire's social, administrative, and cultural institutions in a region that had been governed according to a dramatically different logic for centuries. With careful attention to how officials and subjects thought about the spaces they inhabited, O'Neill's work reveals the lasting influence of Crimea and its people on the Russian imperial system, and sheds new light on the precarious contemporary relationship between Russia and the famous Black Sea peninsula.